I cannot begin to tell you how fed up I am with this rain. Except that if you live in the UK too, chances are you share my feelings and are busy with the same sentiment. The trouble I have is a simple equation:

Toddlers, need entertaining. Toddlers like variety. Toddlers like destruction and space to roam. Mummies do not like getting wet. Thus, being stuck inside the house is a nightmare that will often result in two people climbing the walls by 4:45pm. After a while, you run out of producing tricks, your voice goes hoarse from singing Wind the Bobbin Up a little too enthusiastically at first not anticipating how many times it would have to be repeated, there is nothing actually left in a drawer or cupboard, all the crayons have gone missed (lobbed God knows where) and every new and exciting (really!!) activity is met me snarls of defiance and lunging for the remote/telephone/bread knife/plug sockets/bin.

In good weather, I have tricks up my sleeve. Namely ducks, pigs, the seaside, the playground, picnics outside, drawing on the path with chalk...I know, I do have ENORMOUS sleeves. In torrential floods, I must admit I am stumped. There is only so many times you can haunt soft play before you either go bankrupt or mad, and the great problem is getting anywhere in lashing monsoons. Yesterday we braved it and dashed out to toddler group which is all of five minutes walk away. Today, after miserably watching the drizzle we seized the moment and decided to go and bother the quiet literary types at the City Library. Luckily everyone else had the same idea and there wasn't a single literary type in sight. Instead there were some small children full of beans, what looked suspiciously like a great thong of the Unwashed talking earnestly about dragons and dungeons and taking up all the tables with their special tablecloths and lanky anaemic looking limbs, and several elderly ladies asking about Fifty Shades of Grey.

Our City Library is now huge. It has six floors including a nursery and creche, exhibition space, gigantic paper mache tiger, permanently shut job seekers advice (how fitting in this climate!) and a severe lack of books. It is very clean and modern, but does bear a minor resemblance more to a shopping centre or empty airport lounge as opposed to a centre of learning. Luckily it does contain children's books and a small area to amuse said small children. There is a rather exciting pretend tree and a huge print covering both a wall and curtains of clouds in the sky, so you can pretend you are outdoors. A bonus for us today, was there were some wide steps leading up to this. At the weekend, my friend decided her honorary aunt duty was to teach Wriggles how to climb up stairs. In just under an hour, Wriggles went from clumsily scrambling over legs to being able to shimmy up a lengthy and steep flight of stairs without a second glance. So being able to practise this new skill was a winner as far as she was concerned!

As it was in the same building, we were able to call by the nursery Wriggles had temporarily been in whilst I finished work after our poor childminder had had to bring her retirement forward drastically. Due to our recent hospital admission, Wriggles had missed her last day so it was a lovely opportunity to say thank you and pick up anything she had left. Although she hadn't been there long, she had been assigned a key worker and had a folder full of 'drawings', observations, photographs of what she had been up to and descriptions of how her days there were filled. It is not just a lovely record to keep, but was also somewhat of a relief reading through the notes especially those in reference to the EYFS framework and child development. Although we know she has delays, and has been officially marked down now as globally delayed, the observations were glowing with her skills and it was clear that those partaking in her care were every bit as chuffed as I was every time she did something new. She may seem young for her age, but she is very much getting there and it was with both pride and pleasure that I noticed she is ticking many of the boxes for 8-20 month old development in social, cognitive, personal care, language and gross/fine motor skills. The speech and walking may be missing, but she is quite adept at communicating her needs, charming the pants off making relationships on her own terms and getting around to her wishes. I knew at home she was beginning to grasp the concept that things have uses but this made me laugh:

"....Wriggles was exploring the (toy!) mop, turning it upside down. Earlier in the day, she found the sweeping brush and proceeded to attempt to try and manipulate it to 'clean' the floor and also then to brush her hair."

I must admit, the idea of my Wriggles, who if she didn't look less baby-like by the day could easily pass for 10-11 month old, wrestling with a full-sized sweeping brush and attempting to comb her hair with it made me snort out loud.
That aside though, the report was full of positivity and it will certainly be accompanying us to our next development review. It backs up what I have always thought and said, in many areas she is going at full steam ahead and what some areas may lack in, others such as social skills and confidence, she more than makes up in. One horrible review now months ago, it was implied that by being from a single parent background, she wouldn't be able to be brought on as much as a child from a more traditional background. I was told that unless she went quite substantially to nursery among lots of children, she would flounder. Yes, these recent observations have been made in a nursery setting now (albeit a very small indeed one), but she has clearly managed perfectly well to get this far with so much character by either being with me, or the childminder who only had one other little person one day a week. There might only be two of us, but since that stinging remark I have been determined to make sure we socialise and go to lots of activities in groups and see lots of friends to widen her circle. And it looks like it is working! She is not even 2 yet, so even on a purely hypothetical level as finances would not allow any nursery, I am not comfortable with having her away from me unnecessarily. She is a bright button and unless we become hermits, I refuse to believe her development will be harmed in any way by not rigidly following guidelines in a large group of peers.

Now if that rain can just stop for one minute to be able to get out and socialise.... 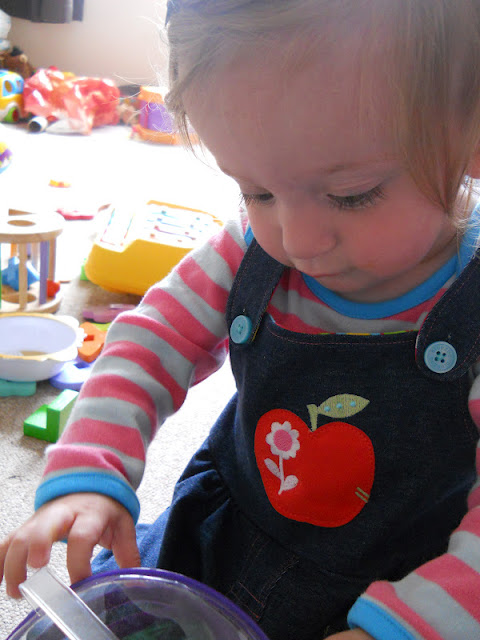