As usual Monday morning I went off to work to round up the ballerinas that had arrived in preparation for the upcoming performance. I began to feel off colour as the morning progressed but put it down to a mammoth walk I had undertaken over the weekend. By lunch I was experiencing some cramps, had began vomiting and was sent home. At home the pain mericfully began to level out and wear off. Something was really not right though. I wanted a medical opinion and I wanted one now and not one that banged on about stress related hormonal bleeding as my GP would wax lyrical over. I would just go to the bathroom first…

...at which point I met a very very small foot.

Being alone in my flat with a tiny pair of feet presenting, stuck two rooms away from a telephone did not leave me with a lot of options. I delivered my baby quickly (at least I think it was quickly; I was on complete shock and autopilot) and importantly alive. She took one breath. Still on autopilot I grabbed a towel hanging out to dry to wrap her in and waddled to find the phone.
The emergency services can do no wrong in my eyes-the woman I spoke to was calm, collected and clearly doing a million things at once to ensure we had all the help we needed whilst making sure I seemed fairly 'with it'. My baby had ceased breathing and so we had a bizarre system where she talked me through CPR and between the “one elephant two elephant” business I would shout out my address, name, and address again and answered questions such as what day it was and who was prime minister. A large banging informed me that the emergency services had successfully broken down my front door. Two teams of paramedics and the police rushed in. Someone quickly placed an oxygen mask over my baby while the umbilical cord was cut. As soon as the cord was cut, a team in scrubs rushed my baby out without even a chance to say goodbye. I presume I must have handed her over to them, though that bit is a blank.
The team left with me busied making preparations. Contractions had ceased and although the membranes and placenta were showing, they were certainly not coming out in a hurry. Whilst the one male policeman was sent to have a strong cup of tea and fix the lock on my door, one poor officer was given the job of crouching next to me with a carrier bag between my legs should I spontaneously deliver the placenta. Fifteen minutes passed and the only change in the situation was I was beginning to shake uncontrollably from the shock. I was bundled into the ambulance and blue lighted to hospital. To try and calm me down I was given gas and air; it felt so odd doing things the wrong way round!
Once in hospital it was all hands to the deck. People in an array of all hospital uniforms came and went very quickly. No one knew how the baby was and seemed to be increasingly worried about how I was too. After trying to tug the umbilical cord and it snapping I was rapidly prepped for theatre for a manual removal. Until that point I would have described myself as needle phobic. I could have had six of the epidurals in a row and not cared. As they neared the end of the procedure finally the news came, nearly three hours later. My baby had been stabilized at A&E in a different hospital and was being transferred as soon as the bed in NICU was ready.
Four hours further after that we met again in NICU. I was allowed to put my hand into the incubator and she grabbed my finger. I felt numb; I am ashamed to say I felt nothing for the poor infant who so desparately needed me to believe in her.

The hours that followed were no more pleasant. It was a sleepless night; the consolation was that a midwife had taken pity on me and found an isolated room on the maternity ward so I did not have to face newborns. Born at 27+6, my daughter fought for her life down the corridor and I struggled to process the last twelve hours. A neonatal consultant came to talk to me and told me the next 48 hours were critical and he could give me no guarantees if she would pull through and if she did then there was by no means a clear path of health. Her rocky start may have severe implications both short and long term. She had suffered a cardiac arrest and was on a ventilator with cannulas, fluids, phototherapy and goodness knows what else.


Since then I had met the doctor who effectively saved her life in A&E. He had recently transferred from a paediatric unit in Scotland and was the one who suggested the cooling method as a way of stabilizing her. I was informed that the fact she had cooled so much with me before the ambulance arrived coupled with the procedure administered by doctors is what saved both her life and brain function. On looking through her notes, a nurse remarked that she had never seen a blood acidity test result especially in a vulnerable patient, like hers and had the patient survived at all, let alone with no scars. But she did. The precious 48 hours came and went without drama. A week later she was demoted from intensive care and I began to fall head over heads in the most powerful love. Ten weeks later she came home with me with where she belonged and where I could tell her I would never leave her again.

When I think of the many different ending that the story could have had, it sends a shiver down my spine. I know we have both been incredibly incredibly INCREDIBLY lucky. The only lasting effects are Chronic Lung Disease, some development delay possibly tied up in mild cerebral palsy and a bit of trouble eating (her) and some wobbly marbles-losing (me). Such a small price to pay.

As medics have cheerfully said to us “you could both be dead!”
Ha ha ha-hilarious isn't it. 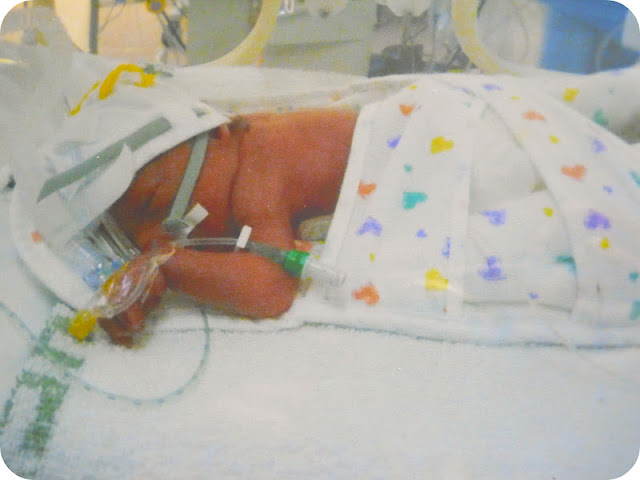