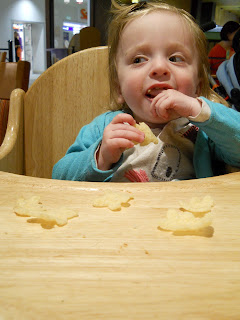 So we're coming to the end of the first week on our whizzy new high calorie potion, Paediasure Plus. If I can find the strength enthusiam will time, then I may take Wriggles to the hallowed Baby Clinic for a weigh-in next Tuesday to see if it may be working. Then again I may not seeing as she spent the best part of a week drinking next to nothing, let alone eating. And the eating bit is not yet back on track. We are back to what I refer to (mainly to myself; I am getting quite used to having inner monologues) as Quavergate.

(I have developed a new tolerance for Quavers as a result.)

It helps if they are proper Quavers too, rather than own brand Cheesy Curls or whatnot.

Quavers first came into our life as one of the many helpful suggestions from other parents when no one medical was taking us very seriously that at nearly a year old, my child was still eating nothing and have seemingly developed cutlery-phobia even if I was the one using them for me. I appealed to the wise people on the Bliss message board community and received some very reassuring responses and suggestions of things to try. Melt-in-the-mouth type snacks, whether your earth-mother-friendly Organix type no-salt-sugar-additives-flavour-guilt-free puffed carrot sticks, or the more common Quaver, Skips or Wotsit were suggested to help her oral skills and give her something to hold, if she so wished. She didn't. There was one blissful moment of curiosity just before her first birthday, never to be repeated for months. I didn't forget though, and made sure my cupboards resembled a well-stocked Asda just in case she ever felt tempted by anything that wasn't out of a bottle.

Around a year corrected, teething was immensely helpful. I don't think you hear that phrase very often. I do believe though, that as well as general development, accumulating trust, etc, that the desire to gnaw generally anything not nailed down to relieve her poor gums, really did help. Because suddenly the very small circle of things that she would mouth (her fingers, my fingers, the tip of my nose, her dummy, Christmas Hedgehog's nose, Mouse, her favourite rattle but not any other rattle, rattly Frog's leg) expanded to include other rattles, books, toes, blocks, the edge of a cushion, paper, cardboard, bath toys and BREADSTICKS. Hallelujah! Although she didn't swallow or 'eat' them, she did chew on them which marked our first real breakthrough in anything not related to fromage frais.

Then, at around 13 and a bit months corrected we started going to a hydrotherapy group for early years run by our physio and some of her colleagues in speech therapy, social work and education. After a hydrotherapy session in the pool, there was snack time. They put out some very baby un-friendly (Annabel Karmel would recoil in shock) such as Quavers, pink wafers and cake as well as banana and fromage frais pots. These foods were specially picked as they are particularly good for developing oral motor skills, especially as every child attending has some level of feeding problems. Week by week, Wriggles slowly consented to touching, then holding, then licking and then tasting. It wasn't until about the last week at around 15 months corrected that she ate one, which was massive cause for celebration. SALT were very pleased too, as it proved that she could develop the motor skills which boded well for the future.

For a while she ate nothing but Quavers.

I was over the moon she was gaining in curiosity about foods (well, one food) and branching out, but was a little concerned that Quavers contain very little nutritional value or many calories. Weeks dragged on. It felt like years. If I withheld the Quavers, she ate nothing. Not even a fail-safe fromage frais. Bitterly I recalled the SALT wittering on "Oh try Quavers, they're great at developing feeding skills." I'll stuff you full of Quavers, you silly old bat, I thought. Quavergate was in full swing.

Of course, in true baby style, just when I was teetering on the edge of complete despair, considering sending hate mail to Walkers and wondering if I would ever be able to start a meal without a little yellow foil bag, then she suddenly ate a whole petit filous, tried some fruit puree, wolfed down some custard and sucked my hot cross bun (not all at once. That is the stuff of dreams, dear reader).

I know now that Quavergate #2 is a shadow of it's former hold. She is still recovering after feeling grim; today is after all the first day in a week where using the inhaler hasn't been a necessity. We all, adults and children alike, feel horrid after being poorly and can eat atrociously. If Quavers are her comfort food and give her a sense of Independence, who am I to argue? They are after all, 88 calories per bag versus 64 calories of the Organix Goodies range. Those 24 calories sound ridiculous, but in our quest to stay on the same line on the dratted growth chart, I will take those 24 thank you very much. I might even have them with added Quavers.