There are days when I think I am not too fussed about living in Newcastle. Days when I think that whilst I don't dislike it, I am here almost by accident and although I have some lovely local friends and a fan-bloody-tatstic health service, could be anywhere else. I suspect those points alone, especially the latter, actually make up a large amount of the reason why we are still here rather than it all being a case of chance, circumstance or lethargy to uprooting. 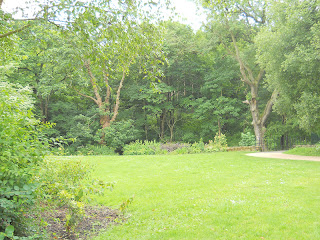 And then there or days, or places, that remind me all over again why I actually love being here and begin to doubt that moving would create any answers. Today was one of those days. There was a brief hiatus in miserable rain and so I decided to be proactive (I say proactive; after some class A faffing and then a phone call from my mother it was actually past 11:30 by the time we got our proverbial skates on) and get us out the door and down to Jesmond Dene. Somehow I always sideline it in my mind, and then upon getting there can't work out why on earth I haven't been back sooner. Although it is not as easy to get to as some parks or places being right at the bottom of a steep valley, it is still very much accessible and better still on foot. 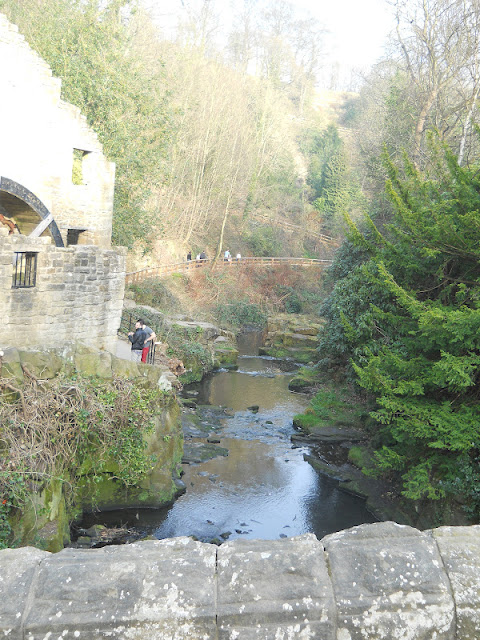 Jesmond Dene is part of the Ouseburn parks network; a series of parks and wooded areas that all run into each other throughout the city, especially from the north to the east. You can happily take a scenic route through several districts should you so wish rather than trudge along busy roads, although you may need time on your side! Once in the valleys that make up the Dene, it is hard to remember you are in the middle of a bustling city, especially one with an industrial past. "Jesmond Dene is a unique haven of peace and tranquillity for the people of Newcastle. It is a narrow wooded valley that follows the river Ouseburn (a tributary of the Tyne) for over 3 km. This provides an important wildlife corridor right into the centre of Newcastle. There is a spectacular mix of native and exotic trees, and the Dene is home to a lot of wildlife, notably the Kingfisher, the Red Squirrel and many woodland birds." It also has the ruins of an old working mill and 19th century banqueting hall which are now used as private artists studios. A newer attraction is 'Pet's Corner'; an urban farm housing pigs, goats, sheep, llamas, ducks and canaries. The visitor centre and Friends society arrange educational activities to bring people together and to explore nature from a very early age to a much older one!

So off we tripped on the metro (which to be honest, is a day out enough for Wriggles who gets madly excited by the whole thing. I am wary she may have a minor trainspotting streak in her) and walked down. Being semi-prepared, I had a picnic cloth and packed lunch. 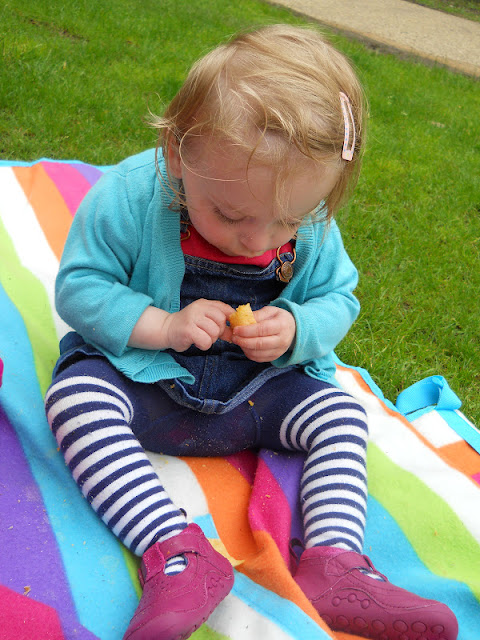 Being semi-unprepared, when she had a reflux-moment I realised I had forgotten spare socks for her and an entire spare outfit for me. Error. Both me, the picnic blanket and Wriggles' new shoes were drenched in regurgitated Quaver and a whole bottle. Unsurprisingly we got a few funny looks. Wriggles decided this was the moment to try and crawl through it and then empty the contents of the pushchair. Just breathe, I thought through gritted teeth, desperately sluicing the pair of us and all contents down with ineffective baby wipes. Breathe. Count to ten. Alright, 20. It can't be helped. For a brief few minutes, locked in the baby chance toilets with a toddler who thought the whole affair hilarious and an excuse to strew possessions everywhere and squwark when tidied up, I felt incredibly low and lacking in any parental control, ability to comfort or knowledge of what is 'right' and thoroughly cross with myself as a result. I was also worried her feet would get cold and conscious of the fact that my new aroma was none to alluring-not that alluring any goats or similar was high on my afternoon agenda. Thankfully, the visitor centre has a cafe, and a shot of caffeine (me) and new bottle (Wriggles) was able to restore both our sanities and I was granted an increasingly rare giving-in to a nap, giving me chance to wring out my jeans and read some of a book. 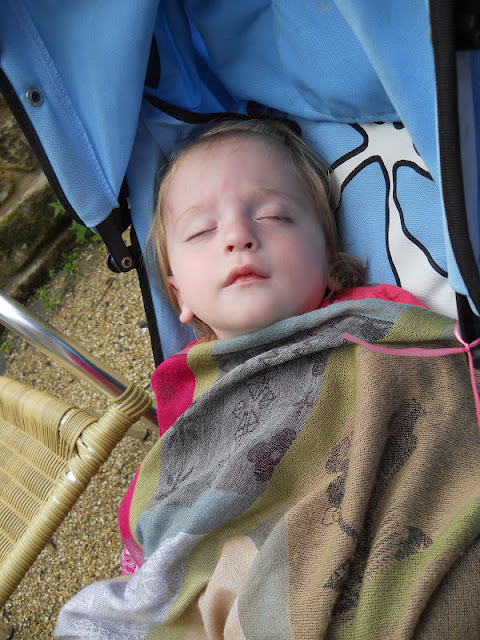 Refreshed by some time not having to eyeball one another, when she awoke we were both all smiles and cuddles again and wheeled our way around to Pets Corner. The last time we were here, a few months ago, Wriggles was not yet really interested. She was fascinated by the people and the other children of varying ages and spent rather a long time fluttering her eyes at various men, but virtually ignored the novelty of llamas and phesants. Now a little older, she was far more alert and interested and giggled at the goats trying to clamber out of their pen (unsuccessfully, I should add). She was keen to practise standing up clinging on to the fence for life to see the ducks and wanted to climb on the bench and attempt to manoevre into the pig's pen. Needless to say, the latter was not permitted but the amazement of there being two big Tamworth pigs infront of her headed off further squwarking. Just recently after looking at me blankly for the best part of a year, signing has suddenly clicked and as we went round she signed pig, dog, rabbit and bird at the respective animals. Too proud! 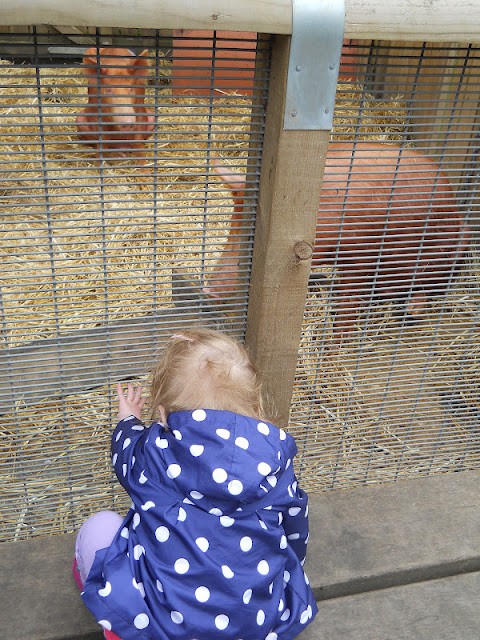 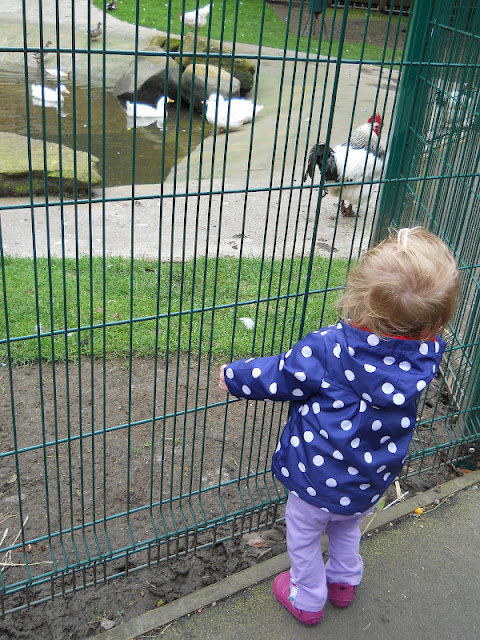 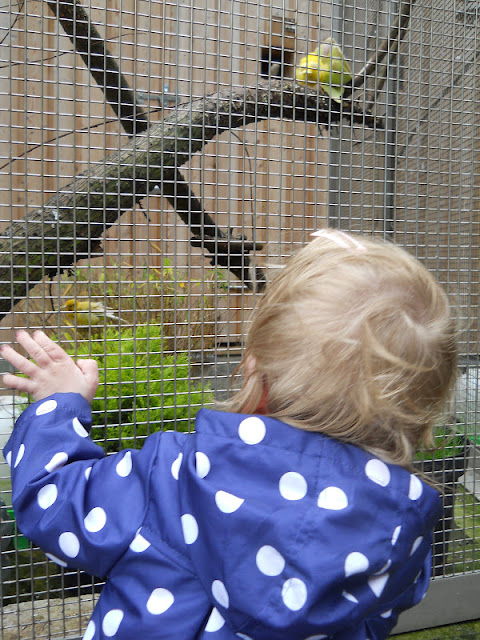 We took a scenic walk through the Dene, stopping every five minutes or so to try out a selection of park benches, which may all look very similar but in actual fact are not.  We tried one with a bin at the left end, some with one at the right, some with no bins, some by flowers, some by gnarled old trees, some by dogs, some by cyclists and loony joggers and one by a bridge. Our trusty stacking cups had come for the ride and so we built up, knocked down, hid and discovered and hooted into them like megaphones (sorry tranquillity seekers). I am a stacking cups convert with almost religious zeal. They frequently come out and about and raise a smile every time. The only downside is that they are very good at being thrown... 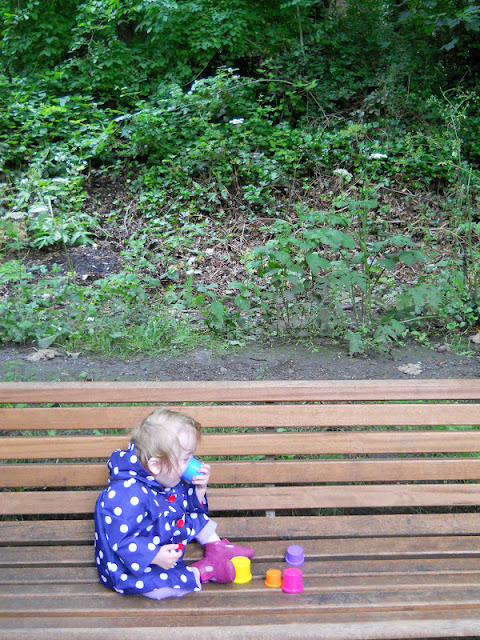 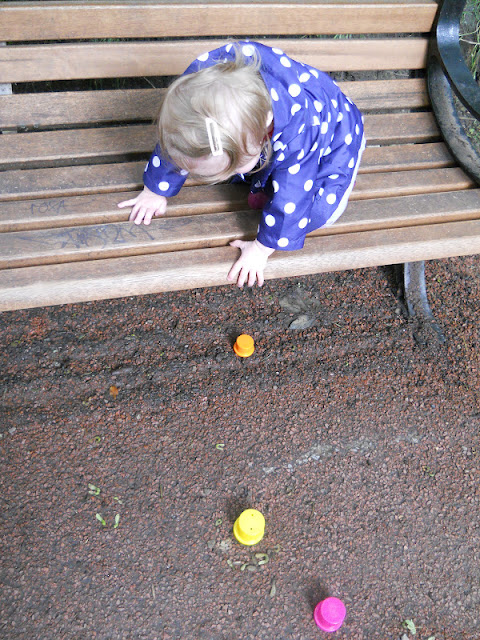 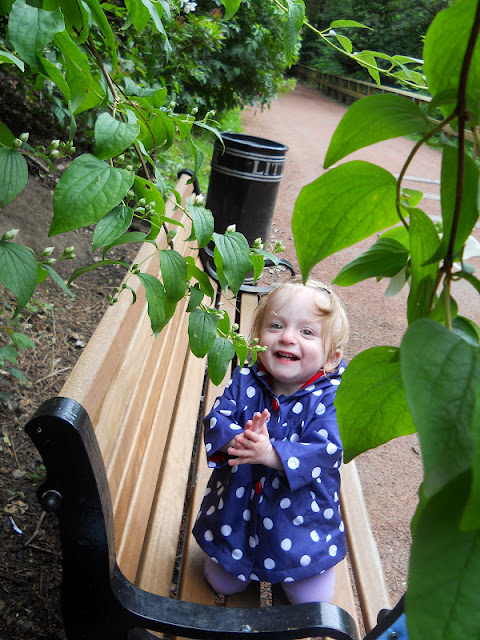 It was amazing to see how the Ouseburn had been affected after the weather last week; it normally is slow flowing river that gentle ambles through the Dene, bisecting the valley. The waterfall is delicate and if anything, it is prone to being low and stagnating in the summer. This week though, it raced through and looked a little worryingly high. We walked up to the waterfall, which was ferocious and the speed of the water spat at us on the bridge, a good few feet away. Wriggles was not impressed in the slightest. 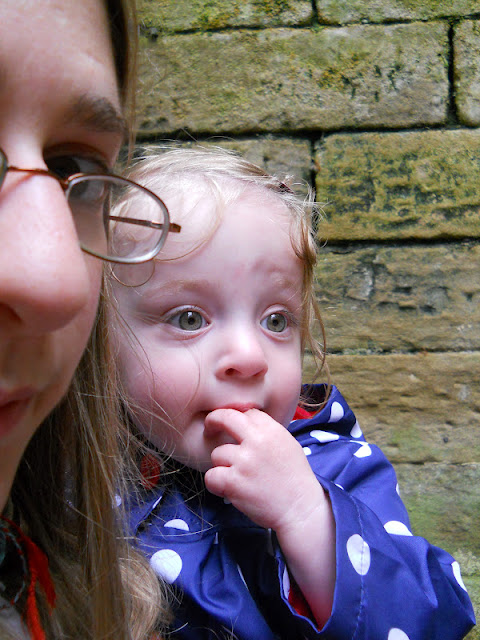 Pre-baby, I would often walk through the Dene, commonly using it as a route between the Ouseburn Valley where I worked part time at Seven Stories by Byker Bridge to where I lived further north of the city. I would go for walks (or hikes, given the steepness of some of the wildlife trails) and explore the systems laid out which are on at least three different levels. With baby, your route is a lot more limited if you have a buggy with you, as much of the footing is uneven and many of the bridges have steps going down and up, or the path suddenly drops away to a sheer looking view. There is however plenty to be seen still, and gentler walks can certainly be achieved. It is more than possible to do it with one pair of hands, though I imagine two would put you at a definite advantage. I look forward to nicer weather (please...?) to be able to picnic out and let Wriggles roam over the grass and inspect branches. It is such a wonderful resource in the middle of a built up city, and so restful and energising to have somewhere so separated and peaceful to go with little hassle or expense. It is the sort of place which grows with children and could be location for many memories being built. The looming trees and canopies smack of games of jungles, forests, fairy grottos. Not having a garden, it is lovely to know that nature is still on our doorstep. When Wriggles eventually takes her wobbly first steps unaided, outside seems a perfect place for gaining in confidence and not accumulating too many bumps and bruises. I just need to find the umbrellas...