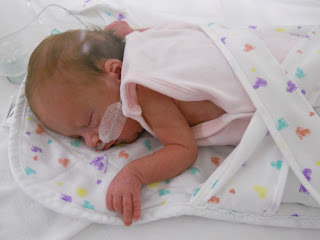 For the first ten weeks of Wriggles’ life she lived in NICU (Neonatal Intensive Care Unit) and SCBU (Special Care Baby Unit). After scaring the living daylights out of everyone, she was able to transfer from the ventilator to CPAP within 48 hours and after 10 days kicked the CPAP too and graduated to air. Her main goal was Growing. She has been born 1090g, just under 2lb 6oz which is not a brilliant weight for an upcoming winter.

I was permitted to hold her on day 4 and from then on, they were satisfied she was stable enough for physical contact to be established and I learnt the art of changing a nappy fit for a tiny doll. Premature babies are highly sensitive creatures and can quickly become very distressed from physical contact, even the briefest brushing, and over-handling which can set back feeds, breathing progression and leave them more vulnerable to infection. Just when you most need to be cuddling your child, the opposite is true. Instead, hours are spent gently talking and peering through the 'portholes' and trying to sweet-talk the nurses into giving you just an extra five minutes when it is your alloted 'cuddle time'.

SCBU was generally a laid back ride as far as such a ride can be. All the tests were mercifully coming back clear and she was slowly learning to tolerate feeds, albeit nasogastric. The only blip was around 32 weeks she began to make a habit of apnoea-ing and experiment with bradycardias. This follows my biggest SCBU regret. I only tried kangaroo care twice (skin to skin contact, normally comprising of having a nurse trilling "I'll just pop her down your jumper!"); on both occasions she ceased breathing and her heart rate plummeted. She went a jolly shade of purple and needed stimulation to come round. The experiences affected me so much I refused kangaroo care, terrified that a third time might be less lucky and it would be all my fault. Although this was justifiable, with the expertise of the staff on hand, I doubt she would have come to harm and it would have helped me to bond as my confidence was sorely bruised and I suffered agonising bouts of inadequacy.
Around this time she began to struggle slightly as oral feeds were slowly introduced and she was started on low-flow oxygen, a habit she couldn’t quite kick before the marvellous home time at 37 weeks. So, on she grew until the magic words “rooming in” came up.

I had completely forgotten she was to come home with me. I didn't know whether to be estatic or terrified. Instead I argued with a nurse and then cried bucketloads. Thankfully, the staff have seen it all before and they made me a very strong cup of coffee and sneaked a spare Quality Street from the staffroom. And so resus was taught, oxygen was ordered and I exhausted Tesco’s aisle of ‘micro’ nappies.

The end was in sight. Or rather, just the beginning!

*** If you want to help babies like Wriggles, please sign the petition Bliss (the charity for babies born too sick, too soon) have launched to ensure that cuts do not affect the already understaffed neonatal units: Save Our Special Care Babies. It is free and takes under five minutes. Further information about neonatal nursing standards can be found on their website ***