One of my biggest regrets about Wriggles' stay in NICU/SCBU was the Kangaroo Care, or rather lack ok it.

Kangaroo Care is essentially skin-to-skin, and consists of popping a baby down your jumper or similar. If you want to fast-track your relationship with a nurse, this is a great way to get them fumbling around your bra as they rescue little limbs and caught up wires. You won't feel shy asking for help after that with them! Depending on the gestation and size of your baby, they may still be very small and likely to potentially get lost inside your clothes. The first time I did it, I lost count of the amount of times that poor Lisa, the nurse, had to rescue Wriggles from inside my dress. She would have been about 30-31 weeks and was still a titch. It very much improved my relationship with Lisa though!

Kangaroo Care has many great benefits for premature babies; the heat from the parent's body means that they do not have to struggle maintaining their temperatures thus saving precious calories, deeper and longer sleep can be established, it is comfort and security for both parties,
apnoeas and bradycardias reduce and gaseous exchange and oxygen saturation levels improve. It also sets up well for breastfeeding mothers, both getting baby used to the breast and improving lactation for those expressing. It is also importantly a source of comfort for baby and parent. 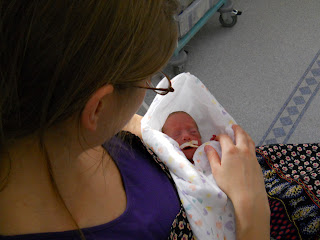 Well, as usual Wriggles wanted to do this her way. All these benefits have been well documented over many scientific and anecdotal studies, but was she having any of it? Was she heck. We did kangaroo care twice only. I would have happily done it all day, every day, but both times that we tried, she stopped breathing and her heart rate slowed and she needed stimulation and sometimes oxygen to come back round. I put the first time down to inexperience for the both of us, but after the same thing happened the day after I was terrified that it was me doing something dreadful to my baby. The nurses after extolling the virtues of kangaroo care were terribly apologetic. They mumbled about over stimulation and having an off day or two. She did shortly go back onto oxygen full time, until she was around three months corrected at home. I was spooked that both I had 'broken' her and that it was her way of rejecting me. It haunted me daily through visits and time spent in SCBU, and I would miserably look at the screens of other people having kangeroo based cuddles. The lack of staff in the unit meant that support was prioritised to mothers breastfeeding, and as I was not, any more kangeroo attempts fell by the wayside. Had I persevered, I do believe it would have helped my mental state at the time and established my identity more strongly as her mother, though I don't blame the unit in the slightest for not helping me although they knew I was struggling. Regretfully one nurse explained they used to have designated family support workers and nursery nurses to help families with other children to have a creche unit, so the parents had extra time in SCBU and also had a personal shoulder to cry on, but budget restrictions had axed this scheme. This to me is a great shame, as all parents I have met, have been mentally afflicted by some means, however great or small, and on discharge have struggled with their emotions and memories. 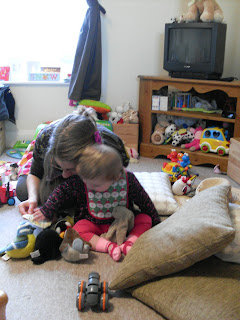 Skin to skin is something that I see as very important. Everytime I watch One Born Every Minute and see the new babies passed straight to the mother's chests, I get a pang that I never had that and that there is a chance I never will. Out of curiousity, once home around Wriggles' due date, I tried skin to skin, but the poor soul started rooting which upset me further as I was not breastfeeding and regretted it then.

Longterm it has not affected us at all. Yes, I do still wish I had done it frequently, but with regards to pregnancy, birth and neonatal, I wish I had done a lot of things differently. Hindsight is wonderful! I don't scrimp on contact now though; Wriggles is subjected to torrents of kisses and cuddles daily, and being only-just-about on the move, still gets carried around a lot, meaning a perfect excuse for more squeezes. Yes, walking can wait.....
Posted by mouse