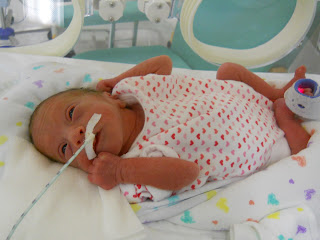 "She talks with her eyes."

So many people have said this to me. And it is so true. You may not yet be verbal but my goodness you are expressive. Your large and beautiful eyes are like a window to yourself. I could stare into them all day as if I had all the time in the world and not a care.

When I was lost for words when you were in Special Care I would stare endlessly into them, pure and utter jet black, newly opened, trying to decipher your face and thoughts. The premature and new infant can only see 6-8 inches infront of them and may not recognise you instantly if you change your appearance. They see black and white. I held you close and peered practically nose against the incubator doors.

When you first began to smile in the beginning of January 2011 it felt like my world began to glow that little bit more. It seemed like I had passed the test. You recognised me and I knew it, really knew it.

The very worst time was when you were 7 months old in Intensive Care and unconcious. Not being able to look into your eyes and see them dart about and drink everything in made it seem like I had lost my baby. The only thing that reassured me I still had you was the monitering screen which recorded your vital signs. You were passive and still, like a doll. When you regained conciousness and drowsily, confused opened them again there was colour and meaning to my life once more and a happiness I did not think possible. It was the visible sign that recovery was happening. 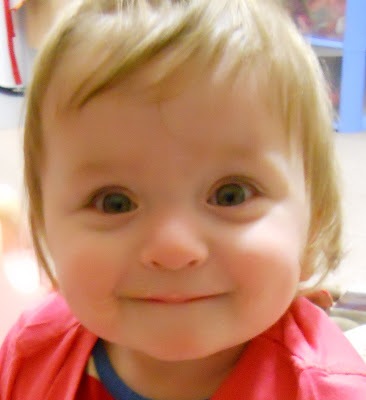 Your eyes are like mine, I think. They have the colouring of your Great-Grandma but look like mine and your aunt's. One is always that little bit more open and wider than the other, a slightly sqwiffy glint! Yours are always so eager, so bright and full of energy. They are piercing and make my heart skip a beat everytime I look into them.

They also often have bags underneath them as you dislike napping in the day, adament not to miss a second of the life you love! But I promise, you won't miss a thing. I'll make sure the best bits are still there waiting for you.

One of my favourite things is to have you snuggled up with me in my bed on lazy weekend mornings so we can come-to together, nose to nose. There is nothing better than to wake up than a pair of bright, cheeky eyes filling your vision as if to say "Come on! Hurry up! There's a whole new day ahead!" as you poke out my eyes. But I'll forgive you. This time.