Growing Up: Wriggles in Review on Home Oxygen 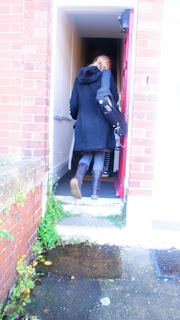 At first, going home on oxygen seemed very daunting. It was easier than I imagined once I got used to it and more of an inconvenience than something of terrors. Wriggles was on just 0.1 litre-she just couldn't kick the habit and needed that little bit of help to ensure she did not plummet quickly or run into any trouble. We used the canisters rather than the concentrators, and had two large canisters about half my height for the flat, and a portable one for going out and about which neatly fitted into a rucksack for my back. Well; a specially designed rucksack rather than your average one. It did make me look like an astronaut and elicited some intrigued attention when leaving the house. I was once followed around Sainsburys by a man-it turned out his mother was going to be on home oxygen therapy too soon and he was curious to ask questions and was having trouble plucking up the courage!

There were good and bad points to be on home oxygen. Obviously the main one was that it was vital for Wriggles' survival and enabled her to grow and develope as she should. It also meant we could be at home rather than languishing by a cot on a paediatric ward. Other good points were that it meant we hit criteria to recieve some help, as it was an additional need and something that required specialist training. 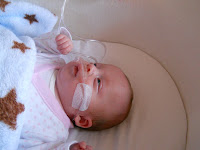 Not only did potential babysitters need to be proficient in knowing the workings of a canister, the level of dosage, check the said infant was saturating well, what to do if it all went wrong and being able to administer first aid (CPR) they also had to be able to tape cannulas on to small babies who do not want cannulas or anything else taped on. Understandable really. The skills were easy to pick up; the main barrier was that it frightened the living daylights out of many people as it made Wriggles look far more vulnerable than she was. I was in no way ready to leave her for a night down the pub, but even if I wanted to, I would have been hard pushed to find someone willing. I was however helped out with FST, the Family Support Team from the Great North Children's Hospital and also a lovely lady from the Rainbow Trust who would run us to hospital appointments and help get groceries. Although we could have got by without these ladies, they really made a difference especially as I was a single parent, so had no other half to share the duties, the worries or the practicalities with. Or god forbid, the rushes to hospital.
Wriggles was in recipt of DLA (Disability Living Allowance) and we were able to apply for a Blue Badge for our non-existant car.  The former was incredibly helpful especially in getting to appointments, the latter was a nice thought. 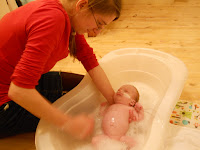 The bad points were that annoying (have you tried to bathe a squirmy 'newborn' attached to a metre of plastic tubing? I would only advise it if you really have time on your hands and a penchant for frustration and are a sadist who enjoys torturing themself with the fear of getting bubbles in the cannula).  You need super-organisation for going up and down stairs to swop over from big to travel cylinders. You need a steely soul to prise off the sticky tape that holds the cannula in place on a regular basis to change it over and often have to treat sores on the face, unless you are lucky enough to find a sympathetic professional to prescribe duoderm tape. The other downpoint is the bloody tubing. You grow to be barely aware of it; until you trip over it with a full plate of beans on toast and stub your toe on a bookcase.

It is less of problem when they are very young; it was when Wriggles began to be more aware of the world around her it became more of a pest especially for her. Although we went home at 37 week, effectively 'term', making her a 'newborn' she had slightly less floppiness than a newborn having been undergoing physiotherapy on the neonatal unit for the past month and having built up a little strength. Tummy-time with tubing is no fun. She was a star though and powered through it.

In reality, the worst thing about home oxygen is the increased risk of RSV; Respiratory Syncytial Virus. This is a common virus that most people will get at some time, that is essentially cold-like. However, in the very young (6 weeks and under), premature, immunodeficient, those on oxygen therapy and those with chronic lung disease such as asthma and broncho pulmonary dysplasia, it can be very severe and can lead to stays in intensive care on ventilation and can sadly in some cases, be a primary cause of death.So we were advised to essentially take up hermiting for the winter months. Needless to say, you don't meet many people during hermitting. In fact, you see very few (not including the postman). Although the reasons were impeccable and Wriggles' health was paramount, I feel I missed out on vital mummy connections to make and having missed any antenatal friendships, it ended up being months before we so much as came across another mum and baby, which would have really helped in those early days, just to know I wasn't alone and that everyone finds it tough, oxygen or no.

But, we got through it. Now it seems a long time ago. In reality, it was just a year. And how things have changed. Wriggles still does tire easily and due the fact her lungs are not tip top and much of her energy goes into existing not growing, she is still quite small and i don't expect things to change anytime soon. But it gave her the best possible start and also enabled us to escape the confines of hospital, for which I am ever grateful.