....so begins mine and Wriggles' new favourite program.
Possibly the best ever.
Also it ellicited the first ever proper laugh out loud giggle from my daughter from a television/film/animation sequence. She has always enjoyed being glued to watching CBeebies, but this has gone beyond smiles... "Hahahahahhha". Don't tell anyone, but it was actually quite a relief to see that she a) understand and b) appreciated slapstick. I cannot imagine having a daughter who patronisingly shakes her head as I guffaw at the likes of Rowan Atkison, Miranda Hart and The Young Ones sighing "oh mummy, you're so SAD".

Anyway, I shall not keep you on the edge of your sofa. It is The Pingwings. 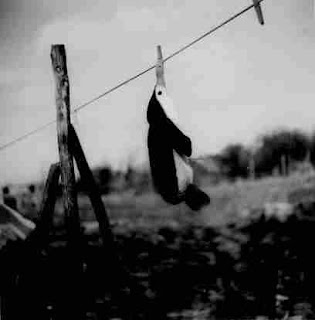 I'll be honest, I had never actually heard of it until winter 2010 when Oliver Postgate sadly died. I was far far far too young to see it broadcast, and it appears to have disappeared into the ether until recently, when some Postgate fanatics started harping on about it. Frankly I don't blame them.
When Oliver Postgate and Peter Firmin first set up their company Smallfilms and began making animation in earnest, they experimented with a variety of early forms of animation. The Pingwings was the first puppet animation they filmed and paved the way for favourites such as the later Clangers and Bagpuss. They filmed two series of very short episodes including ones of greatness such as 'The Ice Cream Tree' (my other favourite thing ever is ice cream: a winner from as soon as the credits rolled). Mama, Papa, Penny, Paul and Baby Pingwing live on the Firmin's farm in Kent, which incidentally is near where I grew up. It is charming, whimsical, full of quirky humour and a very very naughty baby Pingwing. I rather nervously noted that Wriggles was taking notes as she watched Baby Pingwing steal the farmers ice cream, "accidentally" run off for a day trip to the seaside and turn her mama's flippers grey.

For the record: "I carn't cub, I've just bid wodged" translates as "I can't come, I've just been washed". Obviously. Papa Pingwing is pegged to the washing line by his beak (ladies with irritating spouses, take note).

I shall leave you with our also Postage and Firmin-inspired favourite song of the moment Row, Row, Row your Boat from Bagpuss, 'The Ballet Shoe'. When grumpface starts getting a bit tired and cross, I have taken to sticking this on and belting it out whilst she giggles herself silly. I am pretty sure the neighbours are sick to their back teeth of me now......ho hum......