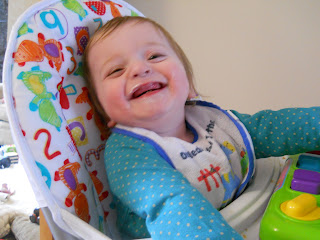 As you may or may not be able to deduce from this here snapshot of my resident pest, she has eaten some food. This may not seem a particularly news-worthy event for a 16 month old.
It is.
I won't go as far to proclaim it is a miracle, but it is not far off.
For reasons knows best to Wriggles, she does not eat.
At least, apart from a handful of coffee shop based exceptions, nothing solid or even petit filous based has passed her lips since mid-December.
Not that she was really eating before then either.

At 6 months she weaned as any normal baby (I think. I don't have any other baby experience but she seemed to do what most other baffled infants did ie. glower at spoon, spew out baby mush, repeat process for a few days and then wolf down an entire pureed banana) and then The Trouble started. Namely a trip up to Intensive Care with pneumonia, and when we returned to the outside world things were a bit, well, buggered. Initially she ate like a horse for all of errr 3 days. Then overnight it was as if a switch had been flicked: nada.
She would get distressed at the mere sight of cutlery, refused to even look at food, point blank ignored me when I ate, gag like mad even on bottles and would not put anything at all near her mouth apart from her trusted possessions: a bottle, Christmas Hedgehog's nose, dummy, her favourite rattle and my fingers.
The months that followed were trying. For a start we were backwards and forwards to the wards as respiratory infection followed respiratory infection. Inbetween, I tried to re-establish weaning and wax lyrical about the Joys of Food. Not hard; I love eating. I quite like playing with food. I tried every trick in the book and invented some of my own. Every time I thought I'd cracked it (Yes, she WILL lick the spoon at least if Spot the Dog 'feeds' her while I bellow "The Grand Old Duke of York"!) it was a false alarm and like in snakes and ladders we would be back on square one at the bottle of the pile. Eventually she began to hold a spoon if it was empty and play with a bowl. Then she expanded gradually the things she would put near her face and in her mouth. She would sometimes touch food and warily paint both of us in puree and yoghurt. She began to slowly take minuscule amounts of puree and fromage frais and hold small pieces of finger food like biscuits or rice cakes.

Around 14 months we were on a high at two small portions of a 'stage one' fruit puree or yogurt daily and occasional practise-chewing of crackers and breadsticks. I proudly reported that to the dietician in December and of course the next day she stopped eating again and has not resumed yet until today! Please let this not be another fad...

It is hard to suss out. The combined medical opinion is that it is a muddled up combination of "oral trauma" from repeated nasogasteric tube insertions, intubation (ventilation), multiple breathing support occasions which are all centered around the face be it via mask, cannula or tube, amounting to a juvenile 'phobia' or aversion; combined with terrible reflux which took a very long time to be medicated adequately which has likely damaged her oesophagus even if not severely or long-term; an over sensitive gag reflex and immature stomach valve, meaning that sometimes even brushing her lips result in the entire stomach contents of the day landing on your carpet. Well, my carpet; oral sensory issues; possible other sensory dislikes (won't entertain even holding moist-like textures like steamed carrot, fruit, jelly) and as she has become older, general sheer-bloody-mindedness of approaching toddlerhood. Or as the paed says when he is stuck "Could be a prem thing." My instinct is that what was once a genuine real issue with feeding has now morphed into familial behaviour; even if it no longer hurts or distresses her to taste, she imagines it will so won't even try a large amount of the time. Argh!

Except for lunchtime today!!!