After a hard start to the week, things are slightly improving.
Here is some proof of some other grand successes: 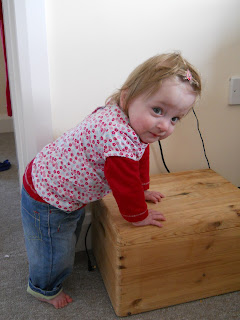 Behold, one standing child. Wriggles has worked out that if you are kneeling and put all your weight through your tiptoes and push reeeeeeeaaaaaaalllllyyyyyy hard then you can get to standing if you don't break all of your toes first. One foot in largely still on tip toes while the other is flat but hey, I can take compromises. She did this first last week in the hospital and then stopped and has been showing off since Tuesday. All the time. Including in the bath. 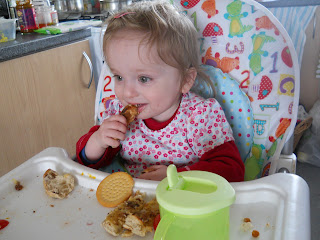 LOOK! She is EATING! Alright, she is sucking the butter off strips of buttered and toasted hot cross bun with the raisins removed, but she is PUTTING FOOD NEAR HER MOUTH**. Out of free will. And some crumbs are actually being swallowed and presumably digested. And although she won't let it go anywhere near her face yet, she has consented to play with the cup and spill water down her trousers. Huzzah! 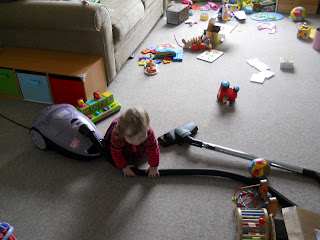 Wriggles helping with the housework. She is no longer scared of the hoover and instead quite likes to climb on it and has worked out how to turn it off and on. She also quite likes riding on it, however cannot yet be trusted without two piles of cushions either side and a mama tottering ready to catch her as her balance is wobbly to say the least.

I hope you have all had wonderfully lovely weeks and any Small People behaved!

*with permission and active encouragement from both dietician and paediatric consultants, plural.
**if you haven't read my blog before, Wriggles has oral aversion meaning that days of food-near-mouth are few and far between and largely the only food that she doesn't gag on is fromage frais. A super diet for a one and half year old.
Posted by mouse