As well as large and vital charities like Bliss among others, many neonatal units up and down the country have their own smaller charity attached that supports both the unit itself paying for medical equipment ontop of the NHS budget to ensure the units remain cutting edge, contributing to research projects, looking after parent and family welfare, paying for extra staff and providing support for the families be they in for a day or 6 months.
My local neonatal unit is at the Royal Victoria Infirmary, Newcastle-upon-Tyne. Ward 35 houses the intensive care, high dependency and special care rooms that make up the unit. It cares for over 600 babies a year born anywhere in the Northern region and at any one time can take 34 babies. It is one of the bigger units in the UK and last year, won the Big Heart (by Mother & Baby magazine and Bliss) award for Neonatal Unit of the Year; not a prize taken lightly when you think of all the fantastic units that save lives every single day. It is by sheer luck that it is my local unit. After university, I applied for jobs liberally and it just so happened my first offer was in my university town of Newcastle so there I stayed in a city suburb, before my daughter came along very prematurely in a matter of a few months. Because of the size of the unit and the specialist Intensive Care it provides, it meant we did not have to be transferred, potentially many, many miles away like many families.
Equally because of the size of the unit, it meant that we got to stay in the same unit throughout our care meaning that when Wriggles progressed or took steps backwards, we were literally just down the corridor in transferring the incubator or cot. Neonatal transfers are one of the big heartbreaks of special care and happen all too commonly; sometimes from necessity for higher levels of care and sometimes for lack of bed space. Neonatal medicine is so precise that these vulnerable beings sometimes need to be transported to another region completely to be assessed correctly and cared for. Leanna, over at Diary of a Premmy Mum has written about this sorry state here.


Charities attached to units can be brilliant at offering support to families either far from home or nearby. The units are incredible at caring for babies, but often simply have neither the budget, time nor resources for the families who come with them. The staff are understandably too busy caring for sick babies to upkeep a parents room or sort out car park permits or accommodation or keep sakes. I can only write about my experience staying in one unit, but it has only been upon leaving the whirlwind that is special care, that I am truly grateful for our supporting charity Tiny Lives and how it influenced our stay.


Tiny Lives, supporting Ward 35 at the RVI which also houses the Great North Children's Hospital is the local charity that aims to make each journey a little easier for the families. The money they raise covers many different things, from providing support to enable to staff on the unit to attend regular conferences and training to stay on the cutting edge of leading care for premature and sick babies to looking after the families, some who pass through quickly and some who are in for the long haul; some local and some very far away. Some of the things that we were lucky to be direct recipients were: 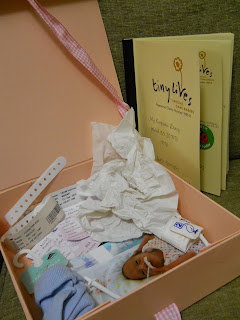 These charities and groups are not going to change to world or revolutionise life or health procedure, but they are going to improve things for sick babies and their families. If they can touch the hearts and ease the pain for some suffering, and bring some cherished sunshine into a dark place, they are more valuable than they will ever know. The specialist care they promote and champion is so important and adds onto what these specialised miracle workers that are neonatal staff and make sure they will always be able to act in the best way with the most knowledge. They build upon sterling principals and ideals of the health service and with an independent pot of money can go the extra mile to bring comfort, from the physical to the mental, for the patients and for their families who will remember more and are as equally on the journey only able to view.
Posted by mouse