I've never been one of those stereotypical girls obsessed with shoes who squeals with glee everytime sparkly footwear comes into vision. I do have favourite shoes though which I were until they literally fall to pieces or I concede defeat. As a student, my mum would physically bin shoes of mine that she deemed "dead" when I went home. One time I had to travel back wearing some very old school shoes as my Converse had mysteriously "disappeared" during the course of the visit.

As she is neither walking nor cruising yet, Wriggles doesn't really do shoes. I did half-heartedly try when she was smaller, but she would kick them off within minutes and as I was already beginning to loose a swift succession of odd mittens, hats and socks that she decided to fling into the ether, any pre-walker shoes or slippers were kept for indoors only. She does have some shoes though for chilly days now and to get her used to the idea of wearing anything more than socks, especially as she may have to wear supportive Piedro boots to complement her physio regime.

Here are our favourite pairs of shoes. I can't say with certainty what Wriggles thinks of her pair, but I love them. They are beautifully classic and soft navy blue corduroy t-bar sandals lined with dinosaur print fabric. I suspect they may be from the boy's section of John Lewis but neither of us care! Mine are scuffed to buggery red leather flats from Clarks. They are worn in to perfection and help me to feel 'me'. I am so excited about buying Wriggles her first real pair of shoes for walking, though think it may be a while off yet. Probably just as well; whilst window shopping I caught the sight of the price of teeny tiny shoes and nearly fainted. Best get saving! I do like though that she will be older so help choose and her personality will be so much more clear to match them to her. 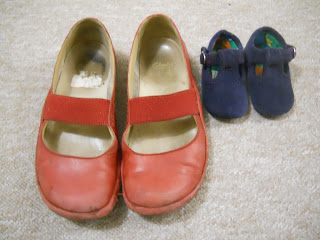 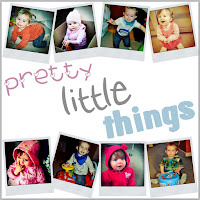 Look at Dear Beautiful Boy and Mumm, Daddy and Me Makes Three who host this!
Posted by mouse