I can't believe it.

I feel intermittently delirious with excitement on her behalf, and sick with fear as the memories race through my head.

Two years ago, I was pretty much without a care in the world.

Today, I have a bundle of giggles who also requires a higher standard of care than other two year olds.

Why hasn't there been a fanfare, why didn't a bell toll two years ago? How can it happen so quietly, so unassuming? One day a singleton, the next a mother. One day at home, the next in hospital. And conversely, one day in hospital, the next at home.

Two years ago I knew little of heart ache and far less about love than I would have liked to think.

Two years later I know the dizzying heights of sheer joy and pure adoration and that love is not soft, it is fierce like a tiger. I know the line of despair, terror and consuming guilt.

A little under two years ago, I bought a book roughly around the time my daughter was in NICU or possibly just came out. The Heart and the Bottle, by Oliver Jeffers. I loved his illustration style, but the book made me cry instantly. It was far more grown up that his previous works, and dealt with love and loss. 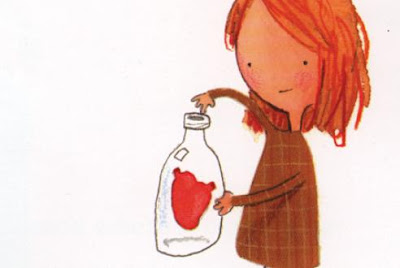 "Once there was a girl who was much like any other
Her head was filled with the curiosity of the world
With thoughts of the stars
With wonder of the sea
She took delight in finding new things
Until one day she found an empty chair
Feeling unsure, the girl thought the best thing was to put her heart in a safe place
Just for the time being..."

And so, the book examines how when your heart is in a safe place, say a bottle, it seems to fix things at first. Maybe at first it is necessary. But as time goes on, it dulls the world around you. You start to think less of the stars, see less wonder in the sea, and new things are left undiscovered, the world slowly drifting further and further from your island.

After the shock, and I hate to say it, but trauma, of having Wriggles, I was very afraid to feel. I was afraid to grip any emotion head-on for the fear it would consume me whole for breakfast. All through NICU, I was so desperate to feel something, anything. I felt protective, I felt fiercely protective, but I also felt numb. I felt like I was in a bottle, looking out clearly on the world but with a sheet of glass between us. I could shout but no one could hear me. They could see me, and waved cheerfully. But I could only stand, pressed up, and wish to be free yet afraid of what was out there. I wish I could say that when I brought Wriggles home, the spell was broken. I think very slowly it began to break, but I still felt so fogged. I knew I was in love, but who knew love was so painful, so fragile, so vulnerable and so closely entwined with a deep seated guilt that threatened to destroy things?

I can't pinpoint when the moment was that things changed, and I found the key to unlocking things. In the book, the girl finds a little friend on the beach who easily unplucks her heart for her. In my life it was not so simple. I was slowly emerging back into the world and allowing myself to sink completely into a devout love with my child, free of any terror or hauntings of the past months of NICU or birth, when she abruptly ended up slap bang in PICU. I knew then what I had to loose, once she was there and it set a terror deeper than anything when I realised that the most precious thing to me might be ripped away again. It was so clear how much she meant to me then and that maybe I hadn't been being true to us both, when I had felt too afraid to love her without abandon. Those days until she was out of the critical period were the worst I have ever felt. Going to sleep with no snuffler by my side felt so bleak, as if the world had stopped turning and lost all it's colour, smells and sounds. I felt bereft, even walking to her cubicle, without her by my side. That moment, weeks later when she came out of her induced coma and I could hold her again was in glorious technicolour. Oh she was floppy, she was pale, she was weak. But she was mine. Mine, mine, mine. I will never ever ever let you go, baby girl.

Of course, it wasn't as simple as that was that. Having my baby back with me, being back with her all the time was the most wonderful feeling ever and affirmed how much I had given over to her, but when we got home I struggled to deal with how things had gone and fell deep into a state of mental unrest coupled with cripplingly guilt that I wasn't making the most of things. I would walk along and cry for no reason, convinced that however much I loved her it would never be enough to make up for her little life so far.

I don't know when that stopped, but it did or at least got to the point of being manageable and I was able to tell my inner jimminy cricket to sod off from time to time. I began to go to baby groups again, to venture to exotic lands like The Park, The Seaside, Coffee Shops. And suddenly things improved. I began to have conversations with fellow mums and not feel a fraud or a headcase.  I saw my baby for being my baby, not a fragile being with too many miniature scars. I began to see that there was a chance, no a fact, that she loved me back. Last birthday was still a struggle. I was doing better but nearer the date became flustered with too many memories and kept nearly blacking out. This birthday, I think I am better. I am excited. I have done present shopping. I have blown up balloons with a faulty balloon pump: now that is love. I'm wearing my heart on my sleeve now most days. It's frightening because there it is, right there, free for the taking. It's not protected, it could easily be broken or damaged. But it's better than locking it away, isn't it? Better than locking me, us, away. I think. I'm not sure every single day or in every single situation. But right now I am.