It's teatime and there are tears.

This isn't unusual. Wriggles' aversion to feeding has often distressed her to the point of tears in the past. I have long learnt that if this reaction is even hinted at, to chalk it up to experience and leave it for another go later. Somethings are just not worth it if that are that bad.

What is unusual is that today the tears are from me: I am crying.

But not from frustration.

Wriggles has just put a vegetable finger to her mouth.

No wait, she has put it in her mouth.

I hold my breath, almost too hesitant to get my hopes up.

Tentatively, over about an half an hour, she returned again and again to nibble away at the vegetable finger. What was even more incredible than this* was the fact that when she couldn't cope with a texture, like a whole piece of sweetcorn, rather than gag and vomit like she has always done, she moved it around her mouth until she could spit it out. I was amazed at this sudden leap in process than I have been waiting for for what is now over a year. To actually willingly handle food, put it to her face, try some, repeatedly try it and use her oral motor skills to break it down... it is so simple and what we take for granted, but it is such PROGRESS and even thinking about it now brings a lump of pride to my throat. 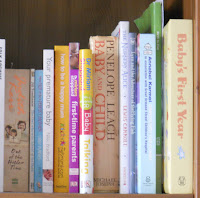 The past year has been a rollercoaster and has taught me a lot in patience and acceptance and I must admit, there were times like in recurrent weeks whereby she would not even go near food, where I fear it would never happen and we would succumb to tube feeding. I have a small section of baby and children books on my bookshelf that have taunted me with their weaning guides and food ideas. Before Wriggles came home and long before weaning, I devoured them soaking up ideas and formulating my own plans. I talked to the neonatal nurses about weaning premature babies and read the Bliss literature. I couldn't wait and had a box of food items and accessories before she even reached term. I did not forsee  a fraught period whereby she wouldn't even entertain being near food or touch cutlery; I didn't know the work that would be to break down her fear or distate for the sensory textures. Slowly, we have introduced milestone after milestone and now, a taste and management of "real food" is the icing on a cake. I'm not expecting miracles; it might not even be the beginning of the end of this time, but I am so pleased for her.


I am so proud of my clever baby girl.


*if you have never read anything here before, Wriggles has struggled with oral aversion and building up trust never mind a variety has been a very long slow process. In over a year, we are now at an albeit limited, "stage two" of the weaning process!
Posted by mouse