All in the Mind

The human mind is incredible.
It is such a sophisticated thing and the most sophisticated thing is, you can't even see it. You can see the brain yes, and really clever people with whizzy machines might be able to see cells and neurons but what does our mind, our thoughts, our intellect and personality look like? Does it look different if we are ill or sad?
Mostly, the mind is incredibly clever and benevolent.
Sometimes it is also incredibly cruel.
You only have to turn on the news to see what human thinking and consequently actions cause sometimes. It might be one person or a collective. It might be one spark or a long thought out plan. And less newsworthy, people out there every day struggle with mental health when their mind is not 100% their own. It might be fleeting; it might be lifelong.

After my recent wobble, I have been feeling so much better for having some time off work with Wriggles. It really helped me reaffirm myself as Alpha Mama (alright, then: a mama at least) and in that month, I did more mum-friendly and social things than I had in over a year. I returned to work as I knew then that redundancy was imminent in around 6 weeks and figured that I could do that, knowing there was an end. I hadn't given up the idea of continuing working if something else came up and I could find appropriate childcare and I was getting maybe a little cocky thinking I had put the worst behind me. Largely, I think the "worst" is behind, just the tough bit that is easy to forget is that there is no magic moment when your feelings go away in a puff of smoke. Nothing has to happen for them to creep back out again from where they have been lurking, but sometimes they sneak up unexpected and uninvited as if to remind you who was once boss.

I had a silly hour or so today. It wasn't quite a panic attack, but was unsettling to say the least. I had a rare few hours apart from Wriggles; we had a lovely lunch together (eaten: one fromage frais, a dollop of banana & custard, several rice cakes, the corner of my panini and some multigrain hoop-type-snacks) and I dropped her off at the creche. She barely looked up, having befriended one of the staff instantly. I kissed her, once, twice, needily three times and still she didn't flinch. Off I slunk, with my tail between my legs and my metaphorical ears wilting.

She doesn't love you.

The thought hovered in my head. I furiously brushed it aside.

She's just independent. And sociable and friendly and a toddler for chrissakes. They all go through mad phases.

You keep telling yourself that. How do you even know she realises you're her mother?

All babies know their mothers. She would have known my voice, my smell. She settled with me and fell asleep in my arms.

She was born early not long after developing those senses and lived in a plastic box for two months.

That didn't stop me loving her and telling her I loved her. And once she came out and came home, I didn't stop holding her and being as mothering as I could.

I'm not talking about what you feel. She wouldn't care if you walked away now. If you went and never came back. She'd be fine. She'd still smile and giggle and laugh. How do you know she would miss you?

How do you know?

I wish sometimes there was an off-button to silence minds.
As anxiety and growing hysteria with a growing conviction I was unwanted swept over me, I could feel myself getting light headed and shaky. Walking past a window confirmed I was as white as sheet and looked peaky to say the least. I honestly thought I was going to collapse with the intensity and was terrified that after all the good work of being able to separate mad brain from normal brain that I was falling back fast into a barren and bleak pit of despair whereby I couldn't control my grasp of my little world.
Thankfully, my more conscious and rational self came back not long after it had left and banished any such thoughts, focussing firmly on what was happening right that second (wandering round IKEA, a task impossible with a small noisebag) and the knowledge that soon I was going to be back with Wriggles and she would be happy with that.

And indeed, she was. I picked her and smothered her with kisses and she happily held my finger on the metro home. We "fed" her toy cat rice cakes on the way back and she squwarked with mirth. I was once more myself and let out a sigh of relief and contentment. Now, surrounded by my things with my daughter sleeping softly in the next room, I know all is well.
A blip.
A silly blip. 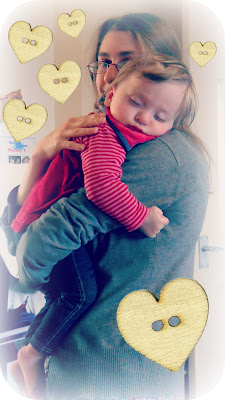 Philosophically, you could debate the notion of love, relationships, parenting, nature and nurture but I know one thing: I have a very happy little girl and happy little girls do not stay happy without love. Little girls who do not care are not full of smiles and contentment. They do not blow kisses or offer to share dribbled-on breadstick. They might scream and try to climb in the bin and ignore all authorative "No"s and happily climb on anyone's lap, but that does not mean indifference or dislike.
I've got so many happy memories with her, and I hope she has too. I know memory is far less sophisticated in the very young, but I hope somewhere in there, there are recollections of moments prized. I'm not, in them by default as the only parent there day in, day out I hope but because I have earned my place and my reward of my daughter's affection as I have loved her to the ends of my ability and further every day, and done the best I possibly can by her. I may not be perfect, but I will bloody well try to be for her sake. (Allowing bin-and-toilet-climbing excluded of course. That will stay not permitted, however many tears it produces).