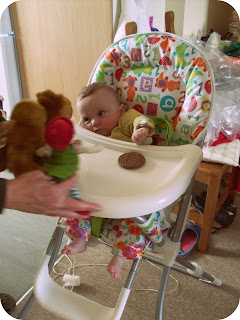 A year ago we got our highchair. Like much else about Wriggles, prematurely! She was being weaned (if you can call it that, not actually eating any solid food) but even with the insert, was very small and her chin was practically resting on the table. She also couldn't sit up by herself and wouldn't for around 6 months more. The only reason I bought it then was that it was reduced at the time and my parents were up visiting to help carry it back from the shop. We duly placed Wriggles in it for a photo opportunity and after that, it stayed rather unused taking up a corner of the kitchen for months to come. She wasn't very impressed at all and it seldom got used as anything further than somewhere for dumping things organising post. 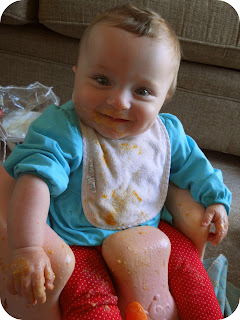 Wriggles was still being (attempted) fed in the bouncy chair and Bumbo, which I cannot praise enough. We were kindly loaned it by the physiotherapy team to help Wriggles' core muscles, but it really came into it's own for so much more. She seemed frightened of the highchair for a very long time, but trusted the Bumbo which she was always more than happy to sit in. I think it made her feel more independent and like she could achieve more. It also freed up her hands rather than trying to balance on the floor trying to support her weight sitting. I did try to use the highchair briefly, not for food but to play in. Partly it was useful if I needed to have both hands free for a short period, and partly I wanted her to relax in it and learn to trust it. She was so swamped in it, there were often about three separate rolled up towels supporting her as well as a booster insert. Slowly, she began to hate it a bit less and discovered the fantastic game of "chuck it over the sides/Mummy pick it up". She was definitely at least one before it got used even semi-regularly for meal times, as other times she was far happier sat in the Bumbo or on my lap. Given that meal times were not her favourite bit of the day, the last thing I wanted to do was make her more fraught by the choice of seat. 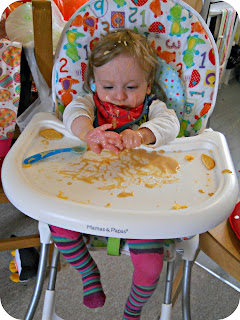 Although progress isn't fast, Wriggles really is making strides with feeding and also accepting more textures and touch. The highchair has now come into it's own, especially as the Bumbo is no longer safe now she is mobile, and the tray is ideal for presenting a buffet of leftovers and finger foods, and if she wants to really get involved and explore the food, then it is wipe-clean (as is she!). Now, we have lunch and dinner in the highchair and she happily will pick through a selection of things like cheese biscuits and Cheerios as well as being spoon-fed. It also makes a good hiding place, standing aide and toy basket when not in use. She still is rather swamped by it...