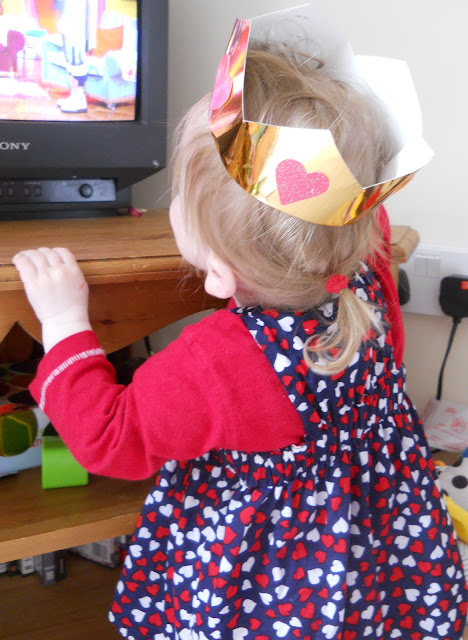 I don't think Wriggles is particularly patriotic. She consented to wearing a red-white-and-blue dress (it was one of the only clean items of clothing) but this photograph captured the split second before she threw her crown, lovingly hastily cut out from cardboard and stapled, on the ground and promptly sat on it.

I am not normally very patriotic or royalist. Normally I am a bit on the cynical Scrooge glass-half-empty side of the table, but since having Wriggles I have lightened my mood and taken pleasure in the small things. One of which, is people being nice to each other. Actually, maybe that is not a small thing. There are some very depressing things out there and some very aggressive events, so when a community or group of relative strangers get together for the day and bake cakes free of charge and swap stories, it is really rather magical and refreshing. It might all sound a bit twee, but having gone to a street party this weekend I am fully signed up to the Nice People club.


My parents and grandparents have long lamented the loss of community, and despite growing up in a relatively small, quiet and pleasant village, I can't say I have many memories or much notion of community. I am ashamed to say, I don't know the names of one set of my neighbours and can count the number of conversations had with with on one hand. Community seems rather lost in today, at least where I live in a city suburb. So it was a wonderful surprise to see a street filled with people making merry, with all ages represented and even sulky teenagers looking marginally less sulky for the day. Families, singletons, friends, strangers...there were all there and all sharing together.

Now that is something to remember.
Posted by mouse