Oh I do like to be beside the seaside...

I have always loved the seaside. There is something magical about the idea of being on the edge of a country and thus the wiggly line of a map. The tide that goes in and out by the power of the mood; the coastline being eroded by the power of nature, slowly eating into land. And the purity of an expanse of sand, just as the tide has gone out only littered with pebbles. It is like new snow, untouched and unmarked, ripe to be covered in marks and memories of days out and as a transient record of time that will be erased only hours later. Of course the less romantic side is seeing man-made debris washed up and when pollution disasters happen. I wish people would stop and think about their actions to be able to preserve things for the next generation and the one after that. I want Wriggles to be able to walk along perfect, albeit mildly chilly and blowy, beaches long into old age. If she has grandchildren (!) I want them to be able to play sandcastles in the summer here in the UK without having to worry about health effects.

When I choose to move to Newcastle, I have to admit I was very swayed by the proximity of the coast. It is less than 10 miles from the city and the Northumbrian coast is stunning. I love the wild swathes and the more populated straights with ice cream shops and buckets and spades. Wriggles and I went to our new favourite haunt, Whitley Bay, today to play on the swings at the brilliant playground metres away from the beach and to sit on the sand. Wriggles was a bit nonplussed at first but began to cautiously touch the sand and dig her fingers in. It wasn't her first trip to the beach, but it has been quite a while since we have been which is baby-terms is like forever! I can't wait until August when we are going to East Devon for a week and weather willing, can sit on the sand every day. Ihave so many memories of sitting in the sand and grazing our chubby knees rockpooling and digging moats round sandcastles and trying to make them reach all the way to the ever changing sea. On a good day, I find there is nothing more relaxing than sitting and watching the waves. Especially with ice cream. 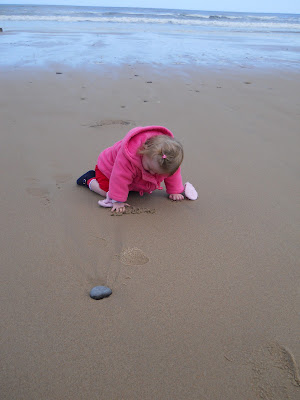 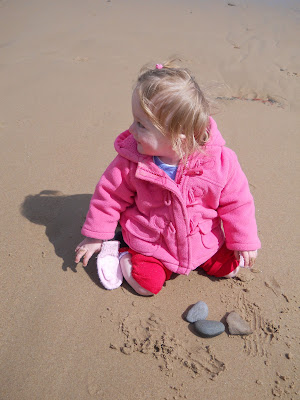 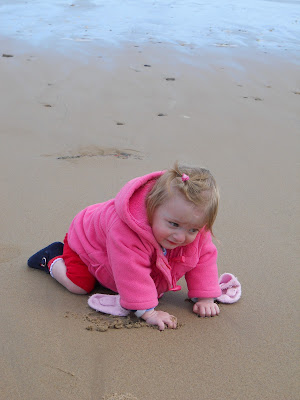 Exploring at Whitley Bay, May 2012

Another bit of favourite coast of mine is Bamburgh and the surrounding stretches and seaside towns. Myself and a best friend went up there in September 2010 on a rare day off we had that coincided. Both of us had been working mad hours at our respective places of work and so it was a welcome break. We got a "scenic" bus which turned out to be one of those that drives in the opposite direction from every sign post and you begin to worry that just maybe you accidentally got on the wrong bus. It took over two hours to drive the 50 miles although it was a very pretty route. Still, two and a half hours on a bumpy bus... We had a perfect day, lunching at a quaint tea room and then running up and down the flat yellow sand. We turned into children again, laughing and shrieking and wading knee-deep in the clear sea. It wasn't that cold; not for the North Sea anyway! The sun was high and hot and we must have spent hours on the beach, soaking our clothes and letting our cares go free. Once dried off, we sat in a beer garden having a lemonade before reluctantly setting back home come tea-time. We decided to stop off at Craster on the way back and unfortunately made the discovery that we had £2 in cash between us and the only place serving food that was open was very expensive. Instead, to kill the two hours waiting for the bus we sat by the harbour and walked along the clifftops as dusk drew in. A perfect day and one that truly feels like my "final hurrah" as a child-less singleton. Because less than 48 hours later I had a very small and very sick newborn living in a plastic box. Although there is no real link, the time at Bamburgh feels like part of my birth story. It isn't of course; I didn't even begin labour there let alone deliver Wriggles behind a sand dune, but the proximity to the event and the carefree nature feels such a start contrast to the fateful Monday that followed, that it feels that that day was meant to be, like a final gift before weeks of pain, anxiety and a thousand different emotions before I got back the best gift of all. 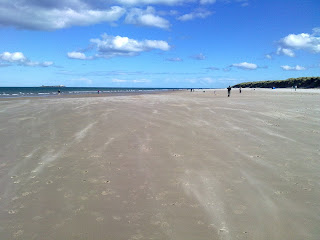 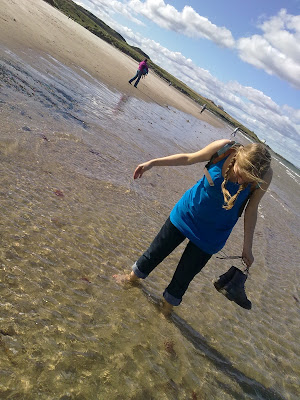 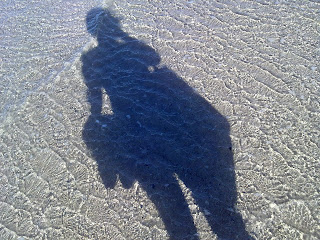 At Bamburgh, September 2010
Less than 48 hours before Wriggles made her entry into the world 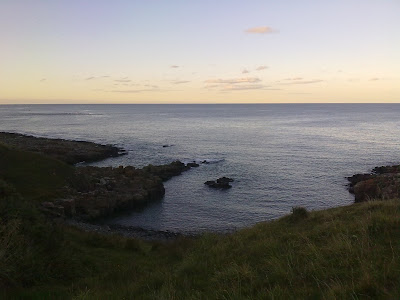 Craster on the cliffs at sunset

Note: Alnmouth is a long way to walk from Craster. It is not advised especially a) in the fading light b) without a map c) with no telephone reception, supplies or adequate clothing d) right on the cliffs-see first point and e) when pregnant. We walked for a few miles and then wisely decided to turn back for the rickety (last) bus rather than getting lost and having to cosy up to some sheep. After Wriggles was born I became increasingly paranoid the premature labour was from either physical exertion such as loony sunset hikes or from catching something in the North Sea. All the doctors and nurses heavily disputed this pointing out neither me nor Wriggles miraculously had a present infection before or after, my waters had leaked weeks before, that my placenta was wrecked and that if I was accustomed to doing long walks or jumping about then my body would acclimatise this in pregnancy and it would not have had an effect until nearer term had I got there. Their view was that the only thing ridiculously stupid about it was given what happened in the following 24-48 hours, was that if it had happened any earlier then we would have had to rely on seagulls who are not known for their midwifery skills. Then again, as I discovered neither are toothbrushes or bath towels.