I started blogging as a direct experience of parenting a premature baby. It has become my personal therapy and a way of connecting with other parents who have shakily stepped off the rollercoaster and are beginning to think 'what the hell do we do now!'. Prematurity took over my life as it was overwhelmed and blasted my mental state into what felt like space. I felt so anxious for my child, so guilty for what she had been through and so disconnected from the real world. Born spontaneously at home before the paramedics arrived, Wriggles arrived into the world at 27+6 weighing 1090g (2lbs 5oz) and although took a breath, then crashed. She was rushed to hospital whereby she was resuscitated. They used a new research method of "cooling" keeping the body temperature low to protect the brain. The fact she had cooled naturally in my draughty bathroom whilst waiting for the team and was still attached umbilically is what I have been told saved her life and brain function. She was then taken to the RVI Newcastle upon Tyne and stayed there for ten weeks. A large chunk of my blog is about prematurity and the experience in neonatal and the effects afterwards, so for this fantastic Tommy's campaign I have decided to hand over the reins to Mouse, who came into our lives on day 2 of Wriggles' life and kept watch by the incubator and has slept with her ever since. 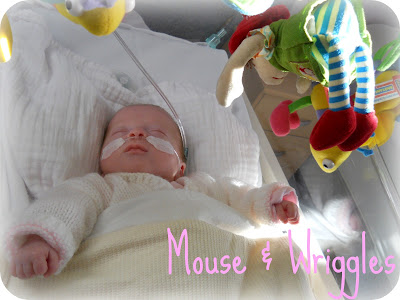 My name is Mouse. I popped out of a carrier bag as Wriggles' First Toy bought by her grandparents on Wednesday 15th September, 2010. I was presented to Mama who felt me very tightly and closely. I could hear her heart thudding away as she pressed me to her, desperate to find comfort in the strange new world. Later that day, we traipsed down the corridor hand in paw to meet Wriggles. She was in the Red Area (Neonatal Intensive Care) and there were 4 incubators in the room and two nurses. She didn't have a name yet, just Baby Girl [surname]. By this point she had come off the ventilator and was on CPAP which was attached to her face with a little grey hat. The huge CPAP tube was nearly as big as her face. She wasn't very big; maybe a little bigger than I was and definitely thinner. My little stuffed arms and legs looked so chubby next to her bony limbs. But we looked at each other, beady eyes to beady eyes through the incubator, pressed against it. I'll look after you. I'll be here when your Mama cannot be. She trusted me with the biggest job of all to keep you safe and keep you loved. Because Wriggles was poorly I was not allowed inside the incubator as part of infection control, but I sat on the top or next to it. I kept Mama company during the long hours and hard times and helped her keep a diary. Her memory was so fuzzy I had to help prompt her a lot, and she would cling onto me as if I was her baby, as she couldn't do so with Wriggles. NICU was an odd place. There were always people everywhere and everything was conducted with speed and a sense of urgency whilst trying to maintain a blanket of calm, yet depsite the hustle and bustle it was very lonely.


We spent a total of ten weeks in the neonatal unit. Other babies and their companions like me came and went. Most of the babies were born at a later gestation and spent far less time in. Some were there for a fortnight, some a little more. In the Green Room we graduated into, we got to know another extreme prem baby girl, E and her guardian toy Bear. Me and Bear got on well; long into the night we would whisper over the tops of the incubators and keep an eye on each others little people. One day, E had a nasty bradycardia and apnoea moment and went purple, needing stimulation. Bear stood poised in shock, willing E to regain breath. She needed some stimulation. Afterwards we were on a high alert, like guards waiting. It was a stark reminder how changeable things are even when they seem to go well.Only a few days later, Wriggles herself had a nasty turn twice in a row and was taken back to HDU to be kept a closer eye on. She had tests taken to see if there was an infection brewing. The HDU was less lively; although there were more doctors and nurses, the atmosphere was more somber than the nursery room which could be quite jovial. I missed Bear, who I could laugh with. Mama was much more worried after relaxing, and would keep vigil until her last metro home some nights. She would sit by the cot, watching Wriggles sleep. I think she wished she could swop places with me, and be cosied up next to Wriggles, touching her fragile skin. I would smooth it with my soft paws and let her clasp her tiny fingers round me. After a few days and an improvement, we were allowed back into the nursery but to our distaste, our 'spot' had been taken over and we were relegated next to the bins. Yuk!


Everyone expected Wriggles to kick the oxygen habit she had developed. She had been so clever at coming off the ventilator and CPAP relatively quickly, it was a surprise when her oxygen requirements began to rise. The nurses kept trying, but within minutes the alarms would ring out. Bear gave me a sympathetic look over the room. E's feeding really took off, and she and Bear went home when we had been in around seven weeks. It was quite sad without them. Mama and E's mum used to talk merrily through the day and chat with the nurses. All the babies we knew had gone home, so it was just me, Wriggles and Mama. Wriggles was finally learning to suck and swallow and taking tiny amounts of bottles. Just 10ml at first daily, but we built it up. I was so proud! After the third air challenge failing, it was decided that she would go home on oxygen. Things got very busy with forms to sign, oxygen to order and Mama to calm down. She was taken off to learn resuscitation and first aid and talked through using oxygen. Before we knew it, it was time to room in. Mama looked so proud, wheeling the cot with me and Wriggles in. The three of us settled into our little room. I did some gymnastics while Wriggles napped-it was all just too exciting!

We finally came home on Monday 15th November at midday. Mama's friend R came with us and snapped pictures to put in an album to treasure. It was such a surreal day, walking out. I was tucked up with Wriggles in the carseat. Mama had found me a tiny new knitted hat so I could have something to keep me warm against the brisk November air. It was hard to imagine that when I had come in September it had been warm and still! Mama had brought Wriggles a furry suit with ears so we could match, and it was so big she looked swallowed up! She looked so confused going out. I whispered that it would be alright, that we were going somewhere where Mama would never have to leave us again.

So, settled at home we were in bliss being all together again. Every morning, Mama looked so dazed as though she couldn't believe her luck. I noticed a crushed photograph stuck to the wall by her bed-I guess it was the next best thing to sleep with when Wriggles was far away across the city. Since coming home, we have had lots of highs and some lows. We have had adventures like going to the park and learning to sit up and some scares like dashes to hospital where Mama would unceremoniously shove me in a coat pocket! Although I got a bit squashed, I was glad to come along for the ride. I started out life as being Wriggles' protector and guardian, and I don't intend to give that up easily. Even though she is now FAR bigger than I am and has learnt to stand up, giggle and play peekaboo, I will always look out for her and remember the humid, quiet nights as I watched her grow and develop as if still inside her Mama. She turned into a real little girl, from a scrawny newborn and I feel privileged to watch her fall asleep and wake up every single day.

Wriggles was one of the lucky ones. Preterm birth (before 37 weeks) is the number one cause of mortality for newborns and is the second leading cause of mortality in the under 5s, second only to pneumonia. Premature birth is one thing that is not specific to poorer countries, although economic and social circumstances do play a part. It is a worldwide problem and one that is one the rise. Every year, 15 million babies are born too early and of these, 1.1 million will sadly die. Many others will have substantial problems relating to prematurity. In the UK, there is a current rate of 7.8% of live births being premature and this is estimated to be increasing at a rate of 1.5%. The UK is ranked 46th out of 184 countries when looking at their premature birth rates. I personally found this surprisingly high, but then considering there are around 60,000 premature births per year maybe I shouldn't have been. All of this is frankly, rubbish and the really rubbish thing?
It could be prevented.
There are a known number of factors which increase premature birth that should be implemented either pre-conception or addressed as early as possible. Women and their carers need to be empowered with the right information to look after themselves and their developing children. No one wants to face the prospect of losing their child, so things need to step up to ensure that all women, across the world have a better chance of carrying to term. 15 million is too many. The Born Too Soon report is the first of it's kind, bringing international figures together and uniting in a new goal to halve the mortality figures by 2025, a goal championed by the UN.

Join in the Twitter party between 3-4pm today if you are in the UK, using the hashtag #borntoosoon tweeting with @tommys_baby.If you have written a post about premature birth or the Born Too Soon report, then linnk up at Not Even A Bag of Sugar.