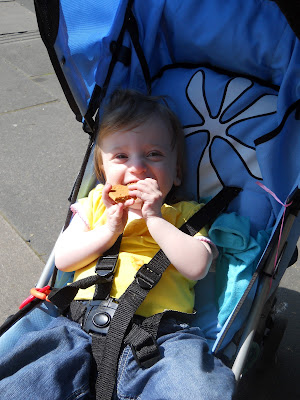 A year ago, I would not have believed this picture. A year ago we were in the hell of trying to persuade an orally aversive child to eat before I realised it was oral aversion. Wriggles is still not a brilliant eater and has made what seems minimal progress but to me and to the medical people around her is phenomenal. And the important thing is that we have made progress, no matter how small or large. Very slowly but surely, the list of foods is inching longer...

At 20 months old, or 17 and a half corrected Wriggles can:
*eat fromage frais and similar textures like set custard or thick yoghurt
*she can manage small, dry foods in her own time, like Quavers, crackers or biscuit
*she will sometimes decide to try or at least touch what I am having. So far the only progress made on this front of going on to eat this is one chip at the childminder's but I live in hope!
*eat most fruit puree and small amounts of vegetable puree if it is mixed with fruit puree or yoghurt

She is even beginning to show preferences, such as apricot yoghurt is the best flavour fromage frais and that cheese flavoured things are yummy. Above, she is gnawing on her new favouite: gingerbread men! She can manage about half of one leg at the moment so I get the rest-not complaining there!