Generally, I have made my peace with oral aversion and it's place in our lives. I have accepted that we are in for the long haul and that one day some years down the line, I will look back with relief and wonder how myself and Wriggles kept our sanity in tact. I understand that there is no magic cure or divine intervention, no magical point where suddenly it is gone. And then, there are the increasingly rare days like today where I want to wail and stamp my feet and scream that it's not fair and got and hide in a huff. I hate feeling cross with something I have no control over and something I don't want to show Wriggles that it affects me, lest I make it worse. I save my frustration for nap times and bed times and cross walks home, where I can breathe and seethe. I'm not annoyed at my daughter, I'm annoyed at the universe and that some people will have to struggle while others don't. I hate that I get annoyed and snappy with people I care about who try and make helpful suggestions, that have long been tried. Very few people understand that it's not that we haven't hit on the perfect way of eating or the perfect food, but that the problem is the entire process itself. It is part behavioural, part sensory and part psychological; and all in an essentially very young child who is not equipped to deal with reason.

This is not just a selection of cutesy pictures of a child being herself and enjoying meal times. 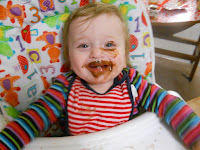 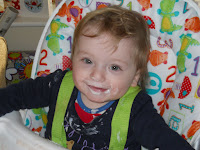 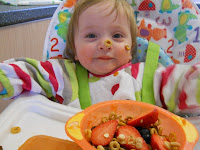 It is repeated sessions of messy play and attempts to show Wriggles that food is fun not scary. And that is long before trying to convince her that it is safe to go near her mouth. I am not against mess or squeamish about my floors, but continued mess with rewards few and far between can take it's toll. I try to forget, but at the end of the day, I have probably spent an awful lot of money of food that has ended up in the bin. I try and shop craftily and use food which I will eat anyway or from my plate or hone in on offers and basics but it still doesn't take away that one way of looking at it is a wasteful process. Most of the time, it's fine and nothing gets a second thought. We get stuck in and play face painting with yogurt, sift through cereal and use fruit slices like lipstick, before the tears kick in, and I don't think of the pennies, merely elated that we have passed the stage where even the sight of food was too much.

At present Wriggles has not just little interest in food but is going off her milk too, which is what concerns and frustrates me. I would not mind as much if she dropped feeds to make more room for food, or made some headway taking water out of a cup, or there was a clear reason like illness. But no, right now the attention span is out the window and she will survive off a tiny mouthful of a mini cheddar and about 50ml of milk if I am lucky. I have a cunning plan, I thought. I'll offer little and often... Nope. Not allowed. Somehow she is not appearing hungry despite using more energy and taking in less and is still sleeping through the night. Christ knows how. I have all fingers and toes crossed this is a very short phase before someone mistakes her ribs for a xylophone.

Oh to set out with nothing but a beaker, cheese sandwich and a kitkat to share!
Posted by mouse